Global warming on other planets?

Believers in global warming hold to what I will call the anthropogenic global warming hypothesis. This involves multiple claims: (1) anomalous global warming is now occurring on Earth; (2) this warming is the result of anthropogenic (man-made) greenhouse gas emissions; (3) unnatural levels of global warming will occur during the next century; (4) the consequences of this warming will be disastrous; and (5) specific, immediate public policy actions are necessary to mitigate this coming disaster. While some claim that the scientific community agrees with these claims, in reality scientists have come to a variety of conclusions on all five claims, and many scientists may agree with some but reject others. Taken as a whole, the scientific evidence does not support such an extreme position. (For more on this, see this page).

Observations of several planets and moons in our solar system show climate change is occurring on these bodies. This is held by some skeptics of global warming to prove that climate change is natural, refuting claims about the nearly exclusive role of mankind in climate change on Earth. Believers have countered that none of these observations have any relationship to natural influences on the Earth's climate. Both claims are wrong.

Part of the problem is a misunderstanding of natural influences on the Earth's climate. The total solar irradiance, or flux of solar energy arriving at the Earth, is well measured and has varied by only about 0.1% in the last few decades. Believers correctly point out that this can only directly produce a temperature change of about 0.07° C on Earth. They err, however, in claiming or implying that this is the only possible Sun-climate link. Considerable evidence supports the hypothesis that solar influences have indirect effects on the Earth's climate, with the potential of contributing to a greater fraction of recent observed climate change.

Some solar output varies by much more than 0.1%, such as UV solar radiation and magnetic activity. One proposed mechanism in particular suggests that variations in solar magnetic activity affect the amount of galactic cosmic rays reaching the Earth. This indirectly influences climate because these cosmic rays affect the formation of clouds which reflect more or less sunlight back to space depending on solar activity, consequently changing the Earth's climate. Such indirect mechanisms could in principle produce most of the modern observed change in global temperature. Studies to date show correlations supporting these claimed mechanisms but parts of the casual link have yet to be confirmed (unsurprisingly, research dollars are scarce when it comes to investigating natural influences on climate).

The relevant point is that the Sun-climate link proposed by scientists skeptical of global warming claims is indirect and involves mechanisms particular to the Earth system. The fact that we have not observed large changes in total solar irradiance, or large climate shifts on other planets, does nothing to refute the claim that the Sun-Earth climate link is significant. At the same time, some and perhaps even all of the extraterrestrial climate shifts are from mechanisms with no bearing on the Earth's climate. This boils down to the fact that we don't fully understand climate change, either here or elsewhere in the solar system. Those that claim we do (and particularly that we can concentrate on a single mechanism for climate change on Earth) are seriously wrong from a scientific perspective.

Our ability to make long-term comparative climate observations elsewhere in the solar system is very limited. Only in a few cases have we had spaceprobes observing particular planets or moons long enough to discuss climate on timescales of decades. Further, the outer planets have orbital periods of decades: this means that their seasonal cycles also occur over decades, such that changes we observe on shorter time periods may just be seasonal. That said, here are reports of climate change:

Several global warming believers have been quick to state that this is a regional climate change. However, Fenton et al. (2006) and Fenton et al. (2007) have identified trends in changes in the reflectivity of the surface dust on Mars from 1976 to 2000. From observed albedo changes they have used models to estimate a global annual air temperature increase of 0.65° C. The direct cause of this predicted temperature change is a change in the distribution of darker dust on Mars' surface, and the resulting warming could be a factor in the retreat of Mars' south polar ice. One proposed root cause of this climate change could be slight shifts in Mars' axial tilt or orbital eccentricity: such changes have also been proposed as key drivers in changing Earth's climate between glacial and interglacial conditions (i.e. starting and ending ice ages). These shifts involve very long timescales on Mars as well as Earth, making this an inadequate explanation for the changes observed currently. Internal variations in Mars' climate, as opposed to influences from solar output changes, are likely at work, but this issue is unresolved. 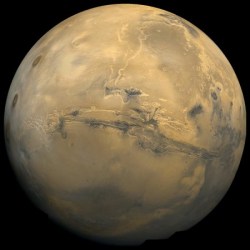 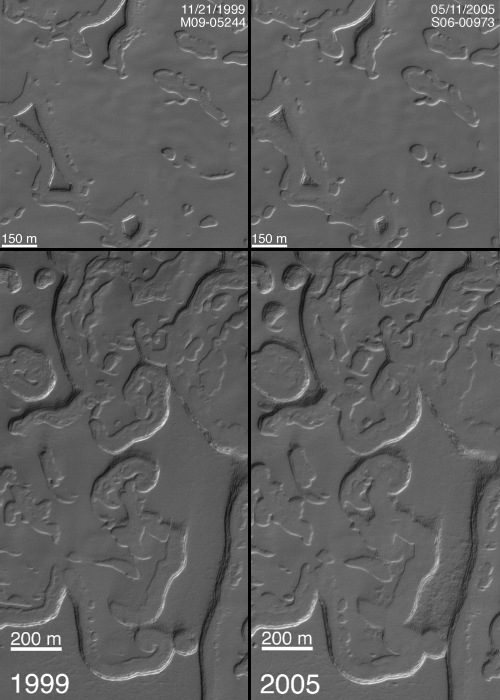 Several noteworthy changes in Jupiter's atmosphere have been observed in recent years. Three storms merged in 1998-2000, producing what became a new Red Spot in 2005 (Marcus et al., 2006). Baines et al. (2007) describe additional recent changes in Jupiter's clouds. While these changes are not yet understood, the internal energy and dynamics of Jupiter are sufficient to provide mechanisms for changes of these magnitudes. Periodic changes and upheavals have been observed in Jupiter's atmosphere for many decades. 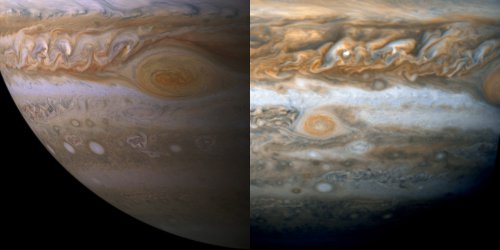 Jupiter in 2000 and 2006. The Great Red Spot is at upper right in both images. Left image shows several white spots (left center) which merged to form the new Red Spot, seen in the right image (left of center). (Credit: NASA, JPL, SSI; NASA, ESA, A. Simon-Miller).

However, Hammel and Lockwood (2007) suggest that the details in the variations can't be explained as seasonal changes alone. They found some correlation between the variations and changes in solar activity--along with correlations between Neptune's brightness and the average global temperature on Earth. If there is a link between the Sun and the climate of Neptune, it would be indirect: their data indicate about a 12% brightening of Neptune from 1950 to 2005, which would necessarily involve changes in Neptune's clouds. 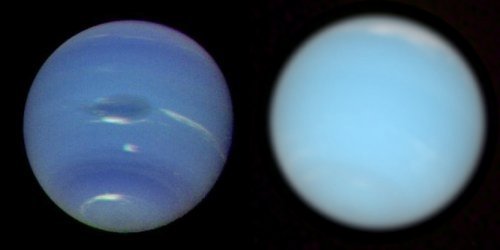 These changes are likely seasonal changes. Triton, like Neptune, has seasons with a 164-year cycle. Currently, the south pole of Triton is in summer. This has warmed the surface enough to vaporize nitrogen frosts on the surface, revealing darker ices below that absorb more sunlight and warm further. The nitrogen contributes to a thicker atmosphere and eventually freezes as frost in the northern hemisphere where it is winter (in 82 years the situation with be reversed). 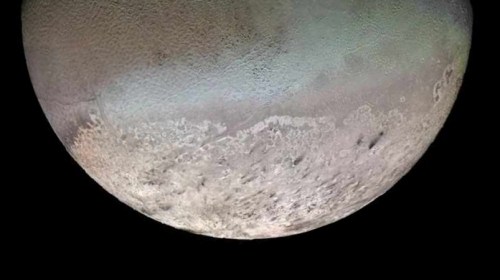 Changes on Pluto involve the evaporation of surface ices from warming regions to add to atmospheric gases, which can migrate and refreeze in cooler locations. This results in changes in the bright or dark regions on Pluto's surface and changes in its overall reflectivity (Hansen and Paige, 1996; Brown, 2002; Pasachoff et al., 2005). Pluto's atmosphere was observed during another stellar occultation in 2006, showing that the atmosphere has become more transparent since 1988 (Elliot et al., 2007) but apparently no additional warming. The warming well beyond Pluto's perihelion could be explained by high thermal inertia or darkening of surface materials (Pasachoff et al., 2005).

To recap: the changes observed in recent years on Jupiter, Titan, Uranus, and Triton are understood as normal and/or seasonal changes. Changes on Mars, Neptune, and Pluto are not fully understood:

In the cases of Mars, Neptune, and Pluto, our understanding is incomplete. They may prove to have no connection to mechanisms for natural climate change on Earth. At the same time, some global warming believers have been too hasty in dismissing these observations. Still, they do demonstrate that we don't fully understand climate change.